In Between The Sewing 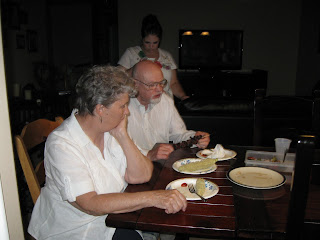 Alright, in between the sewing.... we had two sweeties come visit; my mom and dad.... we got together with the kids that are in town and had lots of talk a little food.... just well.... lots more gabbing. DH and mom and dad and I all went for a drive up to a little town on the other side of the mountains. We had a great little meal.... ( I had smoked Salmon Salad.... yummmmy.... I just should not have eaten allll of it at one time! But it was sooo good! ) we tried Wild Huckle Berry Soda.... (very good I must say). There was desserts.... I had a cheese cake... just a piece mind you not the entire thing!!! And also there was bread pudding.... not bad... a bit too sweet for my liking.... (I know, your shaking your head.... sweeter than cheese cake? I thought so!) And if I remember right there was also.... Huckle Berry Ice Cream.... and DH.... I can't honestly remember if he had dessert or not... but all in all.... an enjoyable day was had by all! Oh, just so you know.... I forgot to take the camera with us... but it was fun spending time with my favorite sweeties! Thanks for coming you two! 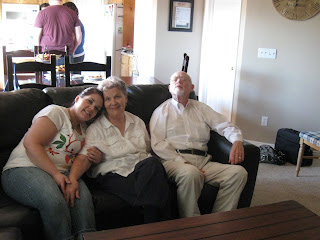 Our DD#2 was hamming with the sweeties! As we were waiting for the shish-ka-bob to cook!
And then the 3 DD's and my SIL and her DD and also her DDIL and I all went to Saint George to see
"Little Mermaid" one night and then "Grease" the next. We had a great stay in a home that we rented from a friend of my neice's. It was hot.... over 100 degree's each day we were there. It cooled some in the evenings
just wasn't what I was used too. We played some, shopped some, laid around the pool some. Ate... of course! And mostly just had a good time together! 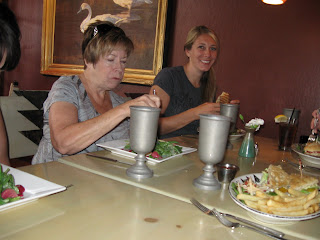 We went to a place called "The Painted Pony" to eat once we got there! The food was good... but mostly we were really taken with the pewter cups! See them here in the picture.... they were sooo great! Nice and cold... they must have been kept a refrigerator... because they really were cold! And one guy...(not our waitress, was there constantly filling the glasses... I think that's all he did in the place! I know... you now think... she doesn't get out much does she? Well... I do get out... I just thought it was funny that that's all he seemed to do!) We were all laughing about the cups being soo great that maybe DD#3 would have to slip some into her purse.... (she always has the worlds largest purse's and honestly... (well really not all that honestly I suppose)  if she had been in that way of thinking... she probably could have managed! But of course.... we don't do that! We did however ask if they sold them, or if there was a place we could purchase them on-line! Nope, neither one of the above! 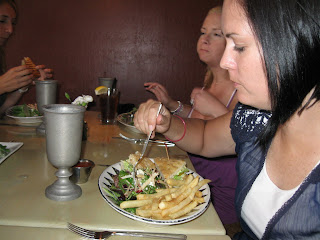 This is my food, I had just a plain old club sandwich.... which was really good. And the salad was shredded apple, feta cheese, walnuts, and spinach. House dressing too. 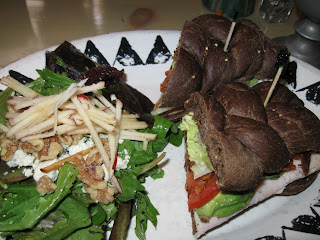 This is Nephew's wifie... she is a cutie! 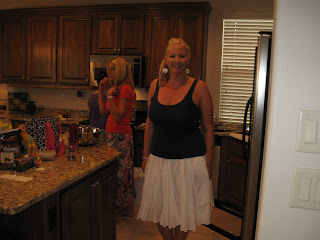 Here are my girls all decked out!  And of course... they were singing along with all the songs! Too funny! 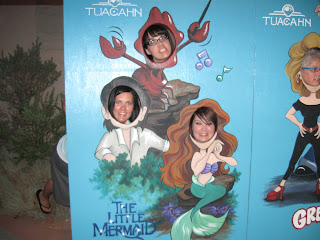 All of us out front of  Tuacahn,  (www.tuacahn.org) . We had soo much fun! 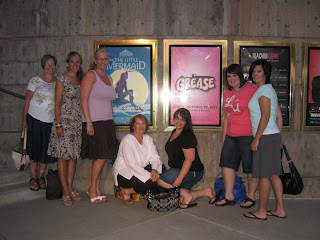 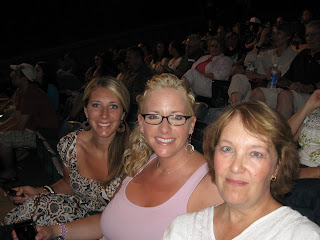 This was the second show.... Grease! The DD's and I sat together the night b/4. Funny thing at Little Mermaid,  we were walking to our seats and all of a sudden I hear; "Sister Cogdill"....... and there was a family from our ward at Church! Makes for a small world sometimes! We drove over 300 miles.... and we still ended up seeing people we knew! Oh, I forgot to say..... that the artistic director is my DH's Cousin and that the gal who plays Ursula is also a cousin of DH. She played Miss Lynch in "Grease" the second night!
Apparently they do such a great job on Disney shows.... they have been asked by Disney to train other companies to do the same thing! So DH's cousin (whom we aren't sure he has ever met!) goes from place to place teaching/training all these other art directors. Interesting. If you go to the link I put above.... and then click on the Little Mermaid icon.... and then go to pic's of the shows.... you will see a great picture of Ursula. Here is a picture of SIL and her girls.... at least the ones who could come!
And as they say.... a good time was had by all! I won't go into details about how silly we got when we had stayed up too late and were busy singing and dancing when we got home! No... nothing in the manner of fermented beverages was had to become sooo silly. Just tiredness and all that music! Until next time!  Oh, that should catch me up for a little while... One more thing.... my DD's (at least two of them) have got me reading The Twilight Series.... so yes.... I'm on book #3. Always something... 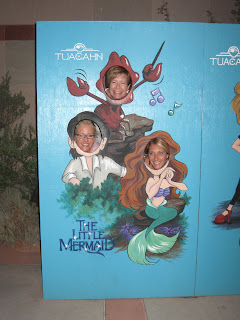