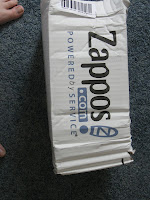 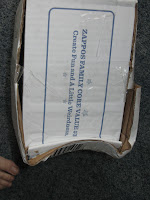 Alright, let's see if I can get this thing to post my pictures. I just went from old to new editor.
I've been busy as I said in my last post, and here are a few of the
reason why;
First off;  My DH's b/day and we ordered him a new watch.... cross that..... two (2) new watches. Namely because the 1st one; that had already been shipped.... yeah, it wasn't the one he wanted! Let's be clear here.... it's all his fault! Not one to point fingers..... (ahem... well maybe just a little!), he was trying to be the good guy and go for the less expensive one, although it wasn't really what he wanted! So, I ordered that one and found out the truth! And yes.... I had to re-order and these two pic's are what the box looked like for the watch he actually wanted. Let's just say, I was a bit concerned (thus the reason for pictures of the box! (To prove to the co. that any damage.... was caused in shipping!)
Forgive the cute pic of my toe, it sorta snuck in on it's own.


Did I show this to you all? O.K. this one I did in May, or towards the first of June. B/4 the birthday and watch fun. Of course, I had to send the first watch back.... but that's something else, I didn't have the free return label with me, so had to have DD#3 make a print of it and get it to me!  After the 2nd trip to the UPS people it was sent off. The watch we did want was just fine... thankfully. 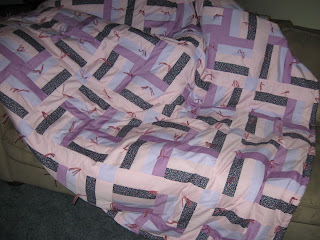 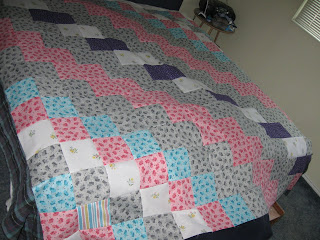 This is another donation quilt, I counted up how many blocks I had and then figured out on graft paper how I wanted to lay it out. Remember good ole graft paper.... it still works! 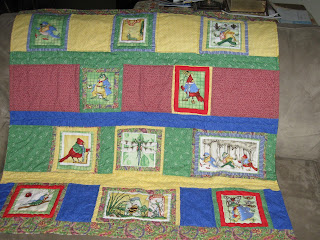 Alright, this is the quilt I put together for our youngest little granddaughter... here is the front;  I pieced it and then machine quilted it.... don't look too closely! 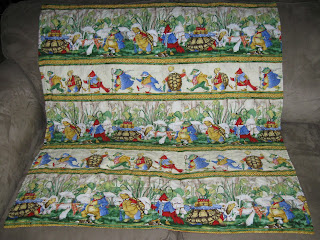 And then here is the back.... aren't the little frog's and turtles and birds cute! They are so much like characters from the the book "The Wind In The Willows". I think I need to find a copy of  it
to go along with this, well, it will have to go later, because I already sent the quilt! Maybe for her birthday or Christmas.


And then remember back a while...... a lonnnnng while ago, I had a white dress that I added some eyelet too and then wanted to add sleeves too? Well, this lace doily.. imagine it cut down the middle about here.   I forgot to take pic's (oops) anyway, first I cut out sleeves from some soft white Lycra and hemmed them. Then I gathered the cut edge, and placed it at the top of the Lycra sleeve and stitched them together. The sleeve's were set in and the only thing I need to do now (besides take out one of the sleeves because I wasn't very accurate!) is stitch the finished edges to the hemmed Lycra and do a couple of little tucks to round up the square-ness..... is there such a word? When it's completely done, I will post a picture! 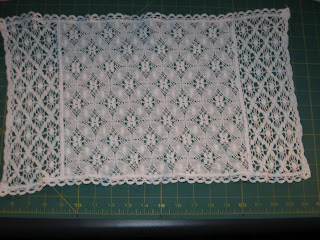 And last but very far from least..... our 4 legged friend has gotten sick! We made a visit to our friendly dog doctor and they did tests. With results soon.... hopefully it's not anything terribly serious. Although, she does look sad, and doesn't want to eat. So she lost some weight. This is a B/4 pic. We shall see about a later pic. 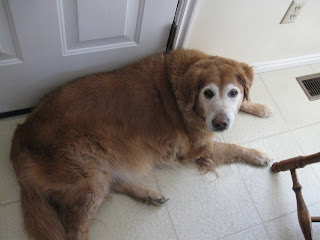 Hope that you are all busy doing something fun.... Because of our Annual Pioneer Day celebration on the 24th of July (When the Pioneers came into the Salt Lake Valley) we will have Fire Works this weekend, which is fun because we have them most all of the months of June/July. Not bad hmmmm, good way to spend the Summer. And we don't have to pay to see them! What is neat is that each little town/city has it's own little Heritage celebration and also does Fireworks.... that's why we have they about all June/July! See.... now you've learned something new haven't you! You didn't know that this was also an Educational blog. LoL...