I must say, that although last week was a very unusual week I was pleasantly surprised that I actually lost 1 pound! I certainly didn't eat as I should that's for sure. But as it goes I've lost another one of the pounds that I gained during the holidays. So, I will take losing it any which way.
Also, no sewing done at all! Besides that... I went to take pictures of my sewing room, and wouldn't you know, the battery on my camera died.
I had e-mailed Sharon (at Red Geranium Cottage) and asked if I could join the Losers Group, she graciously said that I could. Well after I tried to figure out how to get the little diet girl onto my blog, (which I was hopeless at!) I gave up! I wrote back and told her the situation and she sent me the picture and well miracles do happen; I figured it out! So, check it out... she is down on the side bar a bit... but her sad little face is there!

So, about last week. On Thursday at around 11:30 a.m. or so I had heard sirens. I saw that our neighbors house was on Fire! I ran over to the policeman and asked if anyone had been contacted? And no one had. So then started the efforts of trying to get a hold of the people who lived there. I called all sorts of people, information (I couldn't remember the names of the business's that they both worked for) and then called several people to ask them if they could remember where they worked. Finally like a big Jigsaw Puzzle it all fell into place and they were called. As it happens, these people don't actually own the place. So lesson one learned, share your work # with friends/neighbors... so you can be contacted. It's a rental! Another lesson, if you rent have rental insurance! These friends did not have any! So sad to see, I'm not one who enjoys watching a fire in this type of situation. It's amazing to see how many people are drawn to a fire! All in all it was very disheartening to see the people who lived there, our friends, our neighbors loose what they thought was everything! She mentioned that they had had family scripture study that morning. And normally they would take their scriptures back to their rooms. The all left them on the table in the living room. She was wondering if they would even be able to find them! Sure enough, the had some smoke damage but none of them were burned! Really quite a miracle if you were to have seen the house! Also, since there was a lot more fire/smoke damage to the master bedroom, she was concerned that her brand new Serger would be lost. Her son was just walking by us as she was telling me this... (the day after the fire) and he overheard what she had said. He calls back, mom, your serger is fine! It's in the truck! Amazing really!
A bunch of us wanted to help so we took home clothing, lines, quilts etc... that could be washed. The process isn't like regular clothes washing because you have smoke and soot to clean out of the item. We were recommended to use 1 cup Tide detergent, and 1 cup Ammonia. And then you don't dry stuff in the dryer... (and as long as when you take things out of the washer they smell good) you hang them to dry outside. That's to air dry them. Also if they don't have all the smoke smell out of them... then you re-wash everything with Tide and ammonia etc.... It's quite the process alright, but nice to know that they will not have lost everything. I imagine that it's nice to have your own things back to bring a semblance or the normal. All the dry cleanable stuff is going to a Dry Cleaners "4-C Laundry and Cleaners" in town. I hope that they will be able to get the soot and smoke smell out. Otherwise, it would be like a permanent camping trip. And of course there are good and bad with that.

Thanks for the comments about my family... aren't they cute! And that's only part of them. The rest don't have kids, but that will happen when they are ready. 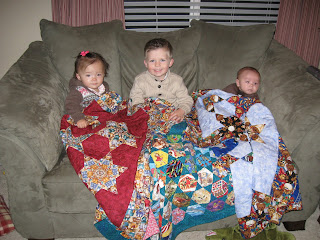 Here is a pic of the "grands" and the quilts that my SIL... made for each one! As soon as she knew there was the possibility that our DD and her DH would get the kids for sure... she started in on them. The oldest already had his! He thinks it's wonderful! Because his other grandma has her own quilting business, and my SIL makes them for all the grandnieces/nephews... I figured I could help out with other things.
Hope everyone has a great week. Maybe I will be able to get a new battery (if I remember) and also get to some sewing/UFO's.
Don't forget to pick up those dropped pins... better to find them right away then to wait to find them another day, and another way! Ouch!!!!!
Posted by Jean at 2/23/2009 10:28:00 AM

Hey good job on the loss. And woohoo on the little girl in the side bar. I knew you could do it. That's just awful about your neighbor and thate fire. I can not imagine.
And yes your family is adorable!!

Hi Jean, just popping in to say "hi" and thank you for stopping by and leaving such a nice comment. I'm am doing much better now, thank goodness. I'm not able to take anything for a cold or congestion except cough drops and Vicks, due to medications. Sure cramps my getting better style! But I'm mended. You header is so neat, a great picture.
Congratulation on the weight loss, a pound is good! Take care, Hugs, Finn